A Legacy of Excellence, A Tradition of Innovation and Growth

Kelly Benefits was founded in the home of Janet and Frank Kelly in 1976. As small businesses were having difficulties securing affordable health care benefits, there was a growing need for alternative sources of quality benefit solutions.

The Kellys’ vision was to form a company that would bring together small businesses through common industry, trade or professional associations, and form larger groups that could provide access to better rates and benefits.

Still family-owned, Kelly Benefits now delivers so much more. Over the years, Janet and Frank’s four sons, Frank III (1986), John (1987), David (1989) and Bryan (1991), joined the business. Today, Kelly Benefits is one of the nation’s largest and fastest-growing providers of benefits administration and technology, broker and consulting services and comprehensive tools and strategies to serve businesses of all sizes.

In May of 1976, Frank and Janet Kelly founded Francis X. Kelly Associates, Inc., a business designed to assist owners of small companies in acquiring affordable health insurance benefits for their employees. Later that year, Gary Chick, CLU, joined Frank and Janet in a business partnership and the company began to trade as Kelly-Chick & Associates, Inc. Since then, the business has grown and expanded into what we know today as Kelly & Associates Insurance Group, trading as Kelly Benefits.

With their attention focused on the small employer group market, Frank and Janet introduced a service that proved to be truly successful. The basic concept was to bring together small businesses through common industry, trade, or professional association to form larger groups. This provided them access to better rates and benefits, similar to those only offered to groups of larger size. For the associations, this meant increased membership and non-dues income and with the associations’ endorsement, Kelly-Chick was able to effectively market a variety of benefit options.

Kelly-Chick’s first association client was the Baltimore County Tavern & Restaurant Association, Inc. (BCTRA). By pooling the Association’s small business members into a group of more than 100 lives, these businesses were able to access through their association, better benefits at lower rates than they could ever have or get on their own. Since BlueCross and BlueShield of Maryland (CareFirst, Inc.) did not pay commissions to brokers at that time, the Company generated income with the addition of a marketing and administration fee to the unloaded health insurance rates. The association-endorsed plans quickly grew as small liquor stores, taverns, and bar owners opted for the better quality insurance plans at lower costs offered through their association.

In its first year of business, operating from the basement of Frank and Janet’s Timonium, Maryland home, the Company was asked by the Maryland State License and Beverage Association (MSLBA) to promote the BCTRA plan statewide. Quickly following were several endorsements, including the Restaurant Association of Maryland (RAM), the Greater Washington Maryland Service Station and Automotive Repair Association (GWMSSARA) and in 1980, the Maryland Veterinary Medical Association (MVMA).

In the early 1980s, Frank and Janet’s four sons began working part-time in the business. In 1986, Frank Kelly III joined full-time after his graduation from Cornell University. John Kelly joined the Company full-time in 1987 after graduating from Washington College, and David Kelly and Bryan Kelly both joined full-time in 1989 and 1991 respectively after they both graduated from the University of North Carolina. Janet Kelly officially retired in 1986 but continues to serve as a Board member and adviser to this day.

It was also in the mid-1980s that Frank and Gary agreed that the Kellys would eventually buy the entire business, beginning the buyout process in 1988. Shortly thereafter, Gary retired, remaining a close friend of the Kelly family and a consultant to the business. One year later, after a family trip to Ireland, the Kelly family crest was adopted as the new Company logo, which includes the Latin words, “Turris Fortis Mihi Deus” or “God is My Tower of Strength.”

Up until 1990, our own employees were responsible for almost all organizational sales, while independent brokers brought in only a few accounts for no commission. In December 1991, however, an insurance committee of the Harford County Chamber of Commerce (HCCC) turned to us for help negotiating, marketing and administering a new association-sponsored BlueCross BlueShield health insurance plan for their members to be marketed exclusively by Chamber members who were qualified insurance agents and brokers.

Endorsements from other chambers soon followed, including the Howard County Chamber of Commerce, the Carroll County Chamber of Commerce and several more. This was the beginning of a new marketing strategy that relied heavily on affiliations with quality independent insurance agents and brokers throughout Maryland who were members of their local chambers of commerce. Our Broker Sales Team, now working with more than 500 licensed agents and brokers, fueled much of the Company’s rapid growth throughout the 1990s to today. That team is now part of Kelly Benefits Advantage (KBA), a division of Kelly & Associates Insurance Group. KBA is a group insurance administrator and wholesaler providing access to quality insurance products, services and benefits technology solutions to an exclusive set of brokers and their clients.

The Administrative Services arm of KBA also continues to grow and is now a leader in consolidated enrollment, eligibility management, billing and call center service that provides cutting-edge benefits administration and technology solutions to employers of all sizes. With unmatched client support and relationships with top carriers, KBA delivers integrated, streamlined administrative processes through our proprietary, trademarked Total Benefits Solution® technology, KTBSonline. For 21 years in a row (2002-2022), we have been recognized by the Baltimore Business Journal as the largest Employee Benefits Administrator in the state of Maryland.

Kelly Benefits Strategies (KBS), the direct sales and marketing division of Kelly & Associates Insurance Group, is one of the largest privately owned benefits brokers and consultants in the country. Since the 1990s, KBS’ growing expertise and focus on the major account market has provided means to gain and serve increasingly larger clients, including many employers with thousands–and even tens of thousands–of employees. Today, KBS serves the diverse needs of direct clients throughout the mid-Atlantic region and beyond.

In 1994, Maryland enacted small group health insurance reform legislation that standardized benefits and rates and, in essence, eliminated the primary benefit of association-sponsored health insurance plans. Fortunately, the major health insurance carriers we represented, including CareFirst BlueCross BlueShield of Maryland, decided to continue to outsource installation, enrollment, eligibility management, billing, premium collection, and basic call center functions and services to us. Although the association “niche” market was significantly altered forever, the opportunity to provide value-added, technologically efficient services to agents, brokers, employers, and their employees would continue to grow and expand. When Maryland’s health care reform legislation went into effect on July 1, 1994, the Company had approximately 1,500 clients, with 400 groups coming through our newly established broker sales division for independent brokers and various chamber of commerce health plans, and approximately 1,100 clients coming through our KBS direct sales team and direct association-sponsored plans. In 1994, total annualized premium administered and under management was approximately $25 million, supported by a total employee/associate count of just over twenty.

In January 1998, after outgrowing the fifth office facility since our founding, the Company moved to a new corporate headquarters at 301 International Circle, Hunt Valley, Maryland. At that time, this new 30,000 square foot headquarters could easily accommodate the approximately 85 employees/associates needed to serve our approximately 5,000 corporate clients. With the move, the Kelly family decided to officially change the name of the Company from Francis X. Kelly & Associates, trading as Kelly-Chick & Associates, Inc. to Kelly & Associates Insurance Group, Inc.

The Company continued to grow rapidly and soon needed additional office space. In 2002, we moved a number of employees/associates to space in a facility located next door to our corporate headquarters at 303 International Circle. Over 300 of our more than 400 employees worked in the leased space at the 303 and 307 International Circle locations.

In May 2005, the Kelly family founded Kelly & Associates Financial Services, Inc. (KAFS) in an effort to establish an integrated payroll product and solution. Frank Kelly III functioned as Chief Executive Officer of KAFS and David Kelly ran the new entity, functioning as its President. Originally marketed as Integrated Payroll Solutions (IPS) and later KELLY Payroll, what we know today as Kelly Benefits Payroll is a subsidiary of KAFS and serves more than 2,000 employers – processing 2 million checks and over 100,000 W-2s per year. The following year, in April 2006, Integrated Workers’ Compensation Strategies, Inc. was also established as a subsidiary of KAFS to provide an integrated workers’ compensation insurance solution alongside our integrated payroll solution.

In June of 2014, the Company purchased the former FILA Sports USA headquarters, located at 1 Fila Way in Sparks, Maryland. Renovations began July 1 of that year and the two Hunt Valley offices moved into a new 100,000 square foot space in June 2015. The road leading to the new headquarters was changed to Kelly Way and the Company was rebranded as simply KELLY, a reflection of not only its physical consolidation, but its streamlined approach to marketing and making businesses better. In addition to the Sparks headquarters, the Company also currently houses valued employees in satellite offices located in both Wilmington, Delaware and Rockville, Maryland.

In March 2021, in celebrating its 45th year as an organization, the Company refreshed its corporate branding once again to become Kelly Benefits. This new identity presents an opportunity to outwardly greater reflect the services we provide as well as our strong commitment to “benefiting” others, whether they be clients, brokers, vendors, the community, or our employees. This evolution of our brand also serves as a continuous opportunity for our divisions, leaders, and the People of Kelly Benefits to work together as one to further position our organization for future success. Both Kelly & Associates Insurance Group, Inc. and Kelly & Associates Financial Services, Inc. continue to serve as the incorporated names for our benefits, administration, and payroll entities.

As the marketplace continues to evolve and change and as unique challenges and opportunities present themselves, Kelly Benefits plans to work diligently, maximize the gifts of every team member, and thus continue to grow and expand while serving our clients with excellence.

From the basement of the Kelly family home in 1976 to an enterprise with an integrated Total Benefits Solution® experience for employers of all sizes, Kelly Benefits has worked to make businesses better for more than 45 years. Watch how we’ve grown. 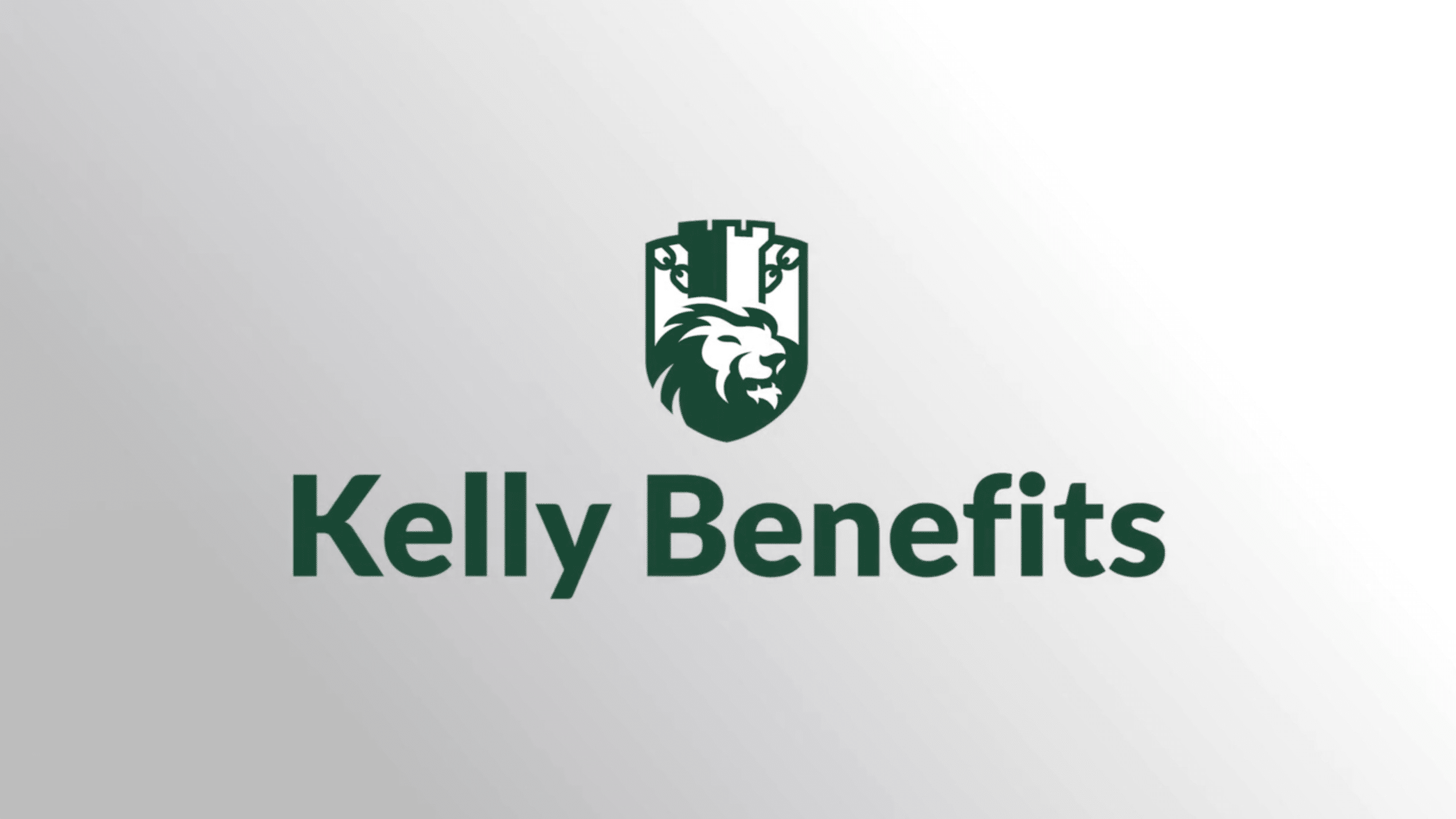 Serving Organizations of All Sizes

Kelly Benefits serves organizations ranging in size from sole proprietors to businesses with more than 20,000 employees. Entities of Kelly Benefits include:

Trusted by Corporate Clients and Brokers

It is through an unwavering commitment to excellence that Kelly Benefits has earned the trust of top employers and elite brokers across the nation. The Kellys attribute their phenomenal growth as a benefit and payroll services leader to:

These elements have been the core foundation of Kelly Benefits for more than 45 years. Each is achieved through the Kellys’ desire to bring honor and glory to God, as demonstrated by our Mission Statement that serves as a standard of measure for all business practices.

Janet and Frank Kelly, the Founders of Kelly & Associates Insurance Group, Inc., began the business in the basement of their home in order to provide benefits to small businesses through an innovative association relationship model.

Kelly & Associates Insurance Group (Kelly Benefits), has grown from a small family business, to an enterprise focused on an integrated Total Benefits Solution® for employers of all sizes. The organization traditionally focused on group insurance and employee benefits, providing employers with consulting, administration, billing and customer service. Today, Kelly Benefits’ offerings have grown to include a wide array of products and services that support an employer’s need to obtain and retain quality employees.